One of the advantages to being in the Air Force is you have access to a lot of military aircraft.  It’s really true if you’re at a MAC base.  That’s Military Airlift Command, where they fly the big cargo planes.  Where they’re not as glamourous as the fighter jets, there’s room for passengers.

One Saturday, I had gotten a call from a good friend who was stationed at Hickam Air Force Base near Honolulu.  He invited me to come visit while his wife was stateside visiting family.  Upon securing leave, I was packed and at the MAC Terminal waiting for a Space-A flight out.

It took nine days flying “Hops” to get there.  I was traveling from the east coast.  But when I stuck my head out of that C-5 cargo plane, the first thing I saw was Diamondhead. 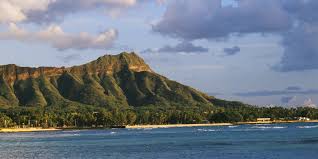 It looked like a postcard.  My friend, Russ, was waiting at the terminal and we headed-out to see the sights.  The first place we went to was a huge flea market.  I never saw one that big.  The weather was perfect with warm sun, cool breezes and temperatures in the mid-80’s.  I hardly broke a sweat.

The next day found us at Waikiki beach.  We brought snorkel gear and the view to the bottom was amazing!  There were beautiful tropical fish swimming right in front of me in crystal clear water.  The waves were choppy, which hindered the fun.  That evening I experienced my first tropical sunburn!  Later, we snorkeled at another beach where the water was calm that time of year and we could snorkel at a much more leisurely pace.

Leisure is the name of the game in Hawaii.  Everything is relaxed and I learned about “Hawaiian Tisk it, however, when the cute Hawaiian girl smiled at me on the beach.  He demeanor was inviting, but she was surrounded by guys who were apparently Samoans.  I’d heard of those guys and was told to steer clear of them.  One skinny Howly against five huge natives who loved to fight wouldn’t have been good odds.

We toured the island in Russ’s Honda Civic and on his motorcycle.  The air was chilly in the higher mountain regions.  There were great restaurants, but the prices were high.  It’s a good thing I brought a lot of cash!

Russ lived in Pearl City on a mountainside overlooking Pearl Harbor.  Not every day was spent exploring.  I was content to just hang out at the house while the cool breeze blew through the open windows.  There’s no need for air conditioning.  Calm is in the air there.  It’s a great place to unwind and just take it easy.

I got lucky on the way back.  It only took three day and three flights and I was back to home base.  If I ever get the chance to get back to paradise, I’m staying!